This Tenor Sunrise has the name "Double Back" for a reason that does not catch the eye at first glance.

This ukulele has a double back, which creates a tonal advantage. 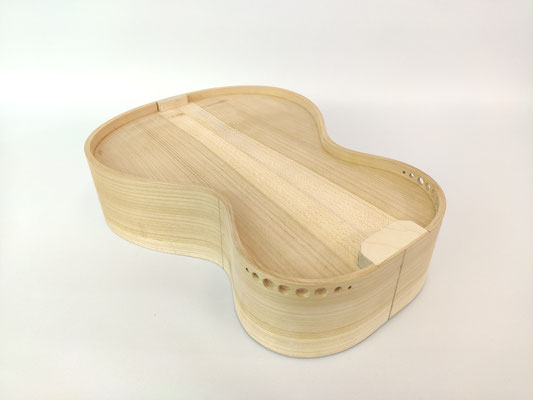 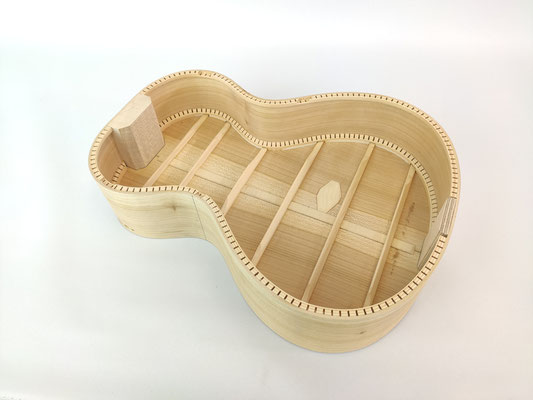 In contrast to the "double back" cherry, I have specializied in slightly darker color scheme of the European walnut for this particular ukulele.
After a few "doubleback" ukuleles I made, I decided that spruce was the best wood for the resonance back inside the instrument.
This result is due to the the excellent vibration and sound qualities of spruce.

It was important to me to develop a subtle design that does not limit the functionality of the double back and yet also brings something special with it.
I created a frame around the instrument using subtle inlays and stripes made of maple and mahogany.
The walnut used not only has a visually unique, expressive and flamed grain, but also a very voluminous and warm tone.

To match the body, which was made entirely of walnut, I used a cherry neck, which I adapted in color to the wood of the body.
The issue of sustainablility was also very important to me with this instrument, which is why I only used local,
non-threatened wood species.
For me, bomboo has established itself vey well as a fingerboard material over the last year.


The body and the of the ukulele have been varnished awith a nitro-cellulose varnish.
This has a very nice, natural feel and is pleasent to hold for a long time.


The instrument is handed over to the future owner in a high-quality hardcase.
It has a badge made of the same wood as the instrument in the case.

machinehead: Der Jung
special: resonance back made from spruce

This instrument is up for sale by the end of January 2021.